The Reason I've been AWOL

For several weeks now, I have been developing pain in my hip and lower back which I'm sure, in part, is due to being so inactive over the last year.  I have been struggling to walk far or to get up from a sitting position, and the pain has been excruciating.  I rang the GP's surgery for advice and was given a telephone appointment with a GP for Monday 12th April.  I actually made the enquiry on 30th March so the appointment was almost 2 weeks away.  In desperation, I steeled myself to visit the pharmacy in the local supermarket and was given the advice to take Ibuprofen and Paracetamol in combination.  Now, I didn't think you were supposed to do that, especially with my IBS problem (now under control, thankfully) but desperate times call for desperate measures so they say.  The pain is a little easier but it certainly hasn't gone.  I have no idea whether or not the GP can help tomorrow.  Time will tell....

What strange weather we are having again.  On Good Friday our daughter and her family came to visit us in the garden.  At first it was cold and windy so we all wrapped up in warm coats and scarves and sat (well spaced) in the garden.  It gave me such a lovely warm feeling to see and speak to them all and have a 'proper' conversation between the 6 of us instead of a 'bitty' one via video link.  By 1pm it had warmed up somewhat so DD drove to the local chippie and bought us fish and chips as well as pies for the boys which she shared out onto plates for us all.  It was the best day G and I have had since Christmas Day.  The family went home around 3pm and it was at that point that the sun broke through (typical!) so G and I stayed in the garden, sitting in the sun wearing short sleeves and drinking mugs of tea...bliss.

This morning I woke at 8am and found it was snowing.  Strange weather....

The allotment is beginning to show signs of  glorious growth.  We have picked the first of the forced rhubarb and G has sown:

Peas, broad beans, radishes, lettuce and planted some potatoes. The raspberry canes, blackberry bush and grape vine are all putting on spurts of greenery as well as the two apple trees.  I love to see signs of new growth, hope for the future.

We were so sorry to hear of the death of Prince Phillip, Duke of Edinburgh,  but he has had a good life and done wonderful things for our young folk with his Award scheme.  I respected him for his plain speaking too. Rest in Peace.

What I thought was wrong was the BBC removing all their usual programmes from around 4.30pm onwards on 3 channels in order to give coverage to the Royal story.  If people were not depressed at the outset, they certainly would be at the end of watching the story all evening. Gardener's World is our favourite prog on a Friday and was sorely missed.  It was shown last night instead and we only just realised in time to watch it 😡

My hip is hurting now after sitting to write this so I'll sign off.

Posted by Pensive Pensioner at 09:41 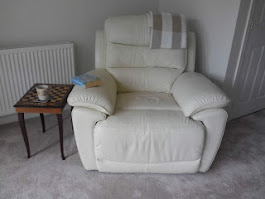 Hello! Welcome!
My name is Angie and I'm a retired mum of 2 and Nana to 4. My hubby G is the same age as me. We have just moved to a small new-build semi in a location just outside town, having been forced to move by hubby's health problems, hence the updated profile! Life for us has changed forever but we are not alone in that... are we, after all....

Every day something has the potential to cheer me up and I relish it. Please do join me in my verbal ramblings. It's lovely to meet you.....