Who Stole The Week?

Where on earth has this week gone? We have been catching up on various tasks that we've been putting off for ages. We've laid plastic down on the allotment so there's nothing more to be done until March/April when we can begin to peel it back and start cultivating (the wooden pallets will be re-purposed into something) .... 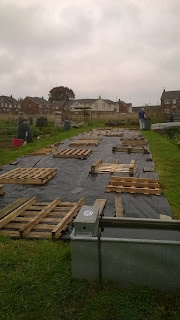 My Sister in Law had a 'big' birthday and someone (not me!) made her the most amazing cake.  She loves bingo, horse racing, the lottery anything, in fact, which involves a bit of a gamble.  If you look carefully there are even some edible £5 notes on the base !..... 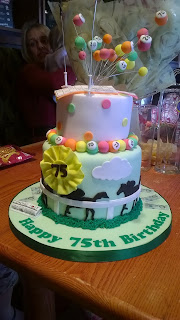 G and I have been window shopping for gardening equipment that we might need next year and for some kind of reasonably priced storage box to take to the allotment. We visited Webbs of Wychbold where I drooled over the wonderful Christmas lights and decorations as well as having a mug of tea for £1.89 each in the (very busy) coffee shop. All I bought were a few bits from Hobbycraft for my card making so not too much spending going on.

On Wednesday, I went Christmas gift shopping with DD to our local shopping centre and managed to complete my gift buying, DD having to go back the next day too to finish hers.  Some money saving ways are definitely rubbing off onto her because she researched prices online before she went back so that she knew exactly where to buy things at the cheapest prices :) That's my girl!  I might start the gift wrapping next weekend when I put up the decorations.  It will be 1st December and perfect to begin the festivities.

G is still suffering with his neck so can't sit still for long.  Fair enough, but it means I can't sit still for long either and my crafting 'me time' has flown out of the window because we have to go out every day at some stage and it gets dark really early now so the light has disappeared by about 3pm.  I also miss my quiet reading time.  I will have to try to be a bit more organised at the weekend when G is at work so that I can fit in a bit of both reading and crafting.  The housework will have to be sidelined methinks ;)

Update:  the postie has just delivered a letter for G with NHS emblazoned across the envelope.  A hospital appointment hopefully.  Watch this space...

A warm welcome to Milentry, my new follower. Just a quick post to report my total and therefore record it for future reference.  I had a small eBay craft sale of £11.85, £2.80 net at the last (pathetic) craft fair making a total of:

I'm now calling it a day as far as the challenge is concerned.  The sum will be enough for Christmas gifts and I'm going gift shopping with DD next week.  For her family I'm buying a practical gift each (PJ's have been requested...yay! ) for which I need DD's input, plus a couple of surprises each to make up a gift bag.  This year has been so much easier to plan for than ever before so I might start another challenge in the new year.

I just have the food to sort out but will use my Nectar points for most of that.
How are your plans going? How many will you be catering for? There will be just 6 of us this year. 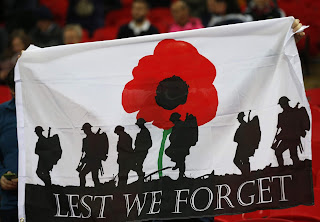 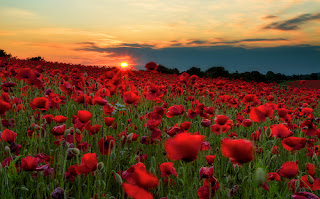 Thinking of all our service personnel past, present and future.
God bless you all.
- November 11, 2018 No comments:

Saturday already!  After a night of torrential bursts of rain, the day dawned damp but sunny.  My sore throat has gone and, although I still have the remnants of a cold, I feel much better.  The craft fair opened for setting up at 9am but, as I was already awake at 5am courtesy of G, it was no hardship.  The footfall was not brilliant again despite radio ads and leaflet drops so I might give it up after the December one which I've already paid my £5 for.  Takings today were the grand sum of £7.80 so it's just not worth the effort :(

We spent a couple of mornings at the allotment and it's looking much better already.... 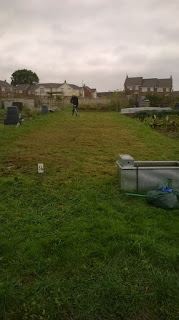 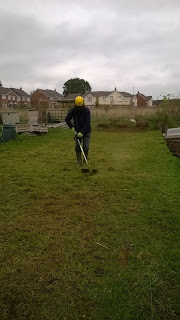 After strimming, we can see just how big it is and the piles of 'rubbish' at the end can ultimately be used to fill some raised beds. As you can see , there are 3 wood edged areas where turf has been dumped, along with other stuff which should break down.... 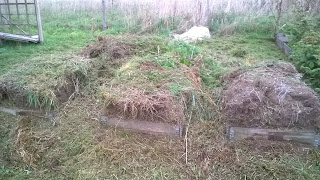 Next week we will cover three quarters of the area with plastic sheeting weighed down with some pallets that a chap very kindly took to the allotment for us.  Once we start cultivating the plot in the Spring we will re-use the pallets to make something like edging or a structure / shelter at the far end.  We are not allowed to have a shed (sob!) and no chickens are allowed either :(

There are some toilets on site; the composting variety! 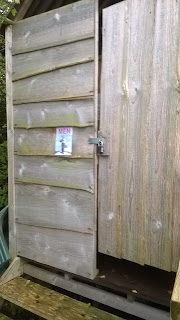 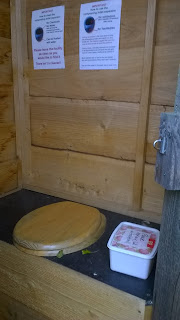 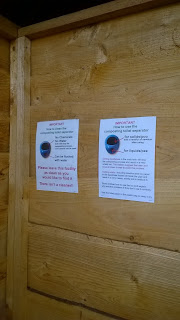 The instructions are on the wall for the mens' room and although I haven't yet investigated the womens' version, I'm sure all will become clear ….lol....

Has anyone else tried a composting loo?  Who the devil empties it? Or is it a soakaway?  AArrgghh!

Have a great weekend everyone.
Stay safe wherever you happen to be x
- November 10, 2018 9 comments:

Firstly a big welcome to Eileen, lovely to see you :)

We have a bit of good news. G has been offered the chance of a half plot on our local allotment.  Now, we have been waiting for over 8 years and had virtually given up on getting anything so the offer was unexpected to say the least.  We took a look at it on Friday.... 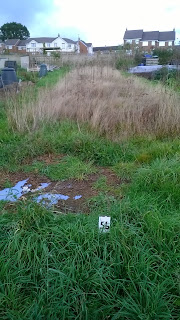 It measures approx. 13 ft by 90 ft and is overgrown to say the least.  To my eye it looks daunting but G is a qualified horticulturalist and has been used to clearing such a space for customers in the past.  With his ongoing neck problem he will have to take things slowly but I'm hoping it will give him something to occupy his mind.  He will get fresh air, a bit of exercise and, hopefully, someone new to talk to. We will tackle the work together mostly.  For now, we have ordered a giant length of black heavy duty black plastic so that we can strim down all the weeds, lay the sheeting down to kill off the weeds during the Winter and then slowly (starting at the front) peel it back to begin planting.  G will make some raised beds so that it will be a 'no dig' plot and therefore easier on our joints.

We are lucky that the dip tank for water is on a corner of the plot so it will be fairly easy to water the plants...…. 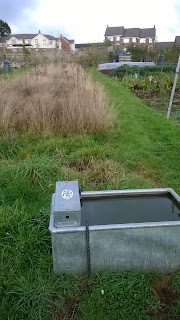 It's an organic site so we need to be careful what we use on the soil but at the very back of the plot the previous owner piled lots of turf upside down in a heap.  It should break down into useable compost to fill the raised beds eventually.

In a spurt of enthusiasm, G has loaded the car with his petrol strimmer and gone off on his own to survey the plot and make a start.  I offered to accompany him but he declined. It will only be 2 hours until it begins to get dark so he can't overdo things and it gives me a couple of hours to relax and catch up on some crafting.  I have another craft fair on Saturday and have some prepping to do.....
AND I have a nagging feeling that I have a sore throat coming (courtesy of the GC I think) DRAT!

Thank you everyone who commented on my last post.  I do so appreciate each and every comment, even if I don't get around to replying.

Stay safe everyone, wherever you happen to be in the world x 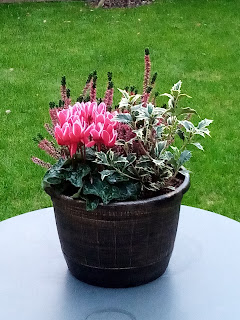