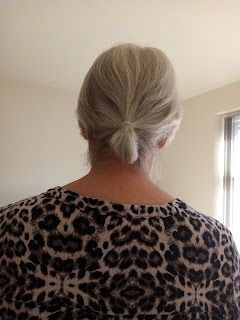 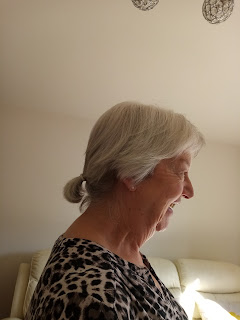 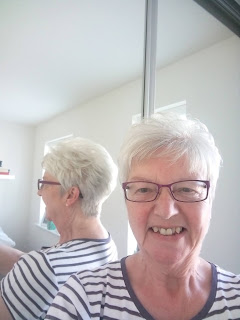 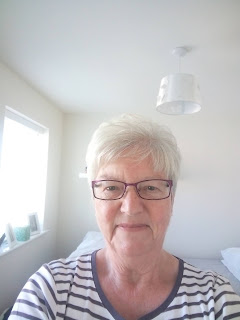 Yes, yesterday afternoon I got my hair cut at last. Our daughter's friend is a hairdresser who works from home and although she is rushed off her feet at the moment, she fitted me in. I feel like a new woman 😁 She only asked for £14 but I gave her £20 because that's what I had been paying the hairdresser in the village and I was so grateful to have it cut. She's a lovely person too 🤗 There was only one customer at a time and she sanitised everything before I sat down. She's also doing a Covid test on herself every other day so I felt very safe. I've booked again for 7 weeks time.

A big thank you to everyone for your comments and good wishes on my last post.  I'm still in pain but the warm weather is helping a little and your good wishes warm my heart ❤️ I have a new follower too. I can't tell who you are but welcome to my ramblings 😊

Yesterday dawned bright and sunny, and saw us queuing in the sunshine to get our second Pfizer vaccination. 20 minutes later we were back in the car and tootling off to the local park to meet our daughter for a good walk and a coffee. I'm still struggling with hip and back pain so the walk was shorter and less vigorous than I would have liked but the sun and fresh air were so good. DD has now more or less recovered from the reaction to her first jab, apart from sudden bouts of tiredness and a bit of a sore arm still. During the night I found that rolling onto my left arm was painful and woke me up. This morning I have a bit of redness and a lump where the needle went in but nothing really to complain about.

I've had my first foray into a couple of charity shops! The shelves were unusually empty but I did find a book for £1 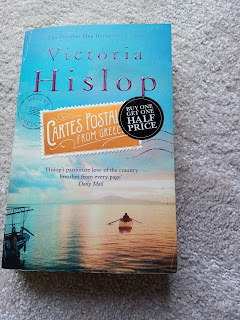 I read two of her other books set in Greece ages ago so I'm hoping this one will be good too.

Today is much cooler and a bit wet. Both the garden and the allotment will benefit from the rain as its been a really dry month so far. The food shopping is being delivered this afternoon so it will be a day of pottering, I think.

Enjoy your day too, and stay safe wherever in the world you happen to be x

Now that we are edging towards a little normality at last, I thought it sensible to take up the offer of the free government lateral flow test kits for Covid-19.  We intend to see as much of DD and the grandchildren as we are allowed and are desperate to keep them safe.  I ordered the kits online and they arrived in the post within 24 hours.  To be fair, the first one was a bit of a faff but the second one (done this morning) was a bit easier now that I know what I'm supposed to be doing.  The instruction booklet is quite clear and easy to understand....... 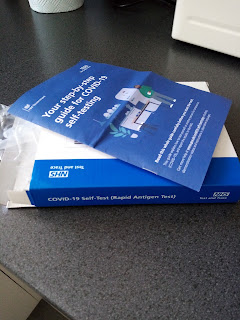 Thankfully,  one line indicates it's a negative result so we are going over to see them this afternoon to enjoy a barbecue in the garden 😎 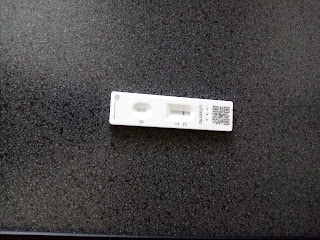 Have you tried one of these tests yet?  How did you manage?
On Friday our daughter, who is 46, received her Covid jab.  The same night she developed a headache, aches and pains, chills, fever and nausea which made absolutely sure that she had very little sleep at all 😨  Yesterday saw her feeling very under the weather but I've spoken to her this morning and she is starting to feel better.  She cat napped on Saturday afternoon and slept better last night.  Her headache has virtually gone too.  She was given the Astra Zeneca vaccine and I think she has been unlucky to feel so rotten but, apparently, younger people feel the effects more.  It's something to do with a better immune system response.  I really hope she continues to feel better as today progresses.  Son-in Law is cooking on the barbie and we are having salad with it so she can sit back and relax.  I'm taking some cup cakes for afters too.  Fingers crossed that the sun stays out!
My current book from the library is this one... 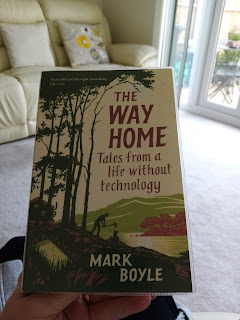 I think someone on here reviewed it (possibly Sue from A Smaller and Simpler Life?) and I'm finding it very interesting.  I do, however, find it a bit hard to understand how a Vegan can suddenly decide to kill and eat animals and fish; one one occasion eat raw fish 👀 I suppose hunger makes you do things you wouldn't normally dream of doing.  The use of technology is absolutely everywhere in our daily lives and I know I would struggle to do without much of it.  I could probably manage without the internet at a push but without a mobile phone to contact DD? without gas or electricity for heat and cooking? without mains water? A composting toilet doesn't appeal either!

What would you be most hard pressed to do without?

Anyway, that's all for now folks.  Stay safe wherever in the world you happen to be x

Hip Pain Corner & Making The Best of It

Thank you to everyone who commented on my last post.  It seems that so many people are suffering back and hip pain at the moment, in fact suffering pain per se.  I think Rambler hit the nail right on the head by saying that the year of inactivity has weakened our muscles to the point of causing us physical problems.  My heart goes out to all of you who are in pain and distress.  You are not alone. Take heart. Sending healing hugs to you all.

My GP rang me yesterday within 30 minutes of the allotted time.  It was so weird trying to explain over the telephone exactly where my pain is 🤔 I explained that I have had it for more than 6 weeks and am unsure what triggered it or how to ease it.  She said that it's probably not arthritis if it came on quickly but is more likely to be tendon damage.  She didn't want to authorise an x-ray unless I've had a fall ( I havent) so the conclusion was to carry on with the Ibuprofen and Paracetamol combined and "see how it goes", in other words "just get on with life and put up with it " 🙄  Time will tell....

On Sunday I suddenly remembered that I needed fuel in the car.  The gauge has been on red for some time so I drove to the petrol station, topped up and paid the princely sum of £2.99 for a basic car wash too.  There was no way I could wash it myself right now so it felt like money well spent.  Afterwards, I popped in the supermarket for some cake and spotted these at bargain prices.  No standing baking.... Job done! 😉 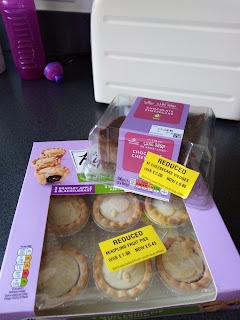 We couldn't make up our minds what to do today. It was quite mild and sunny so on the spur of the moment popped to our local hostelry for a drink.  G enjoyed his first lockdown-easing pint.... 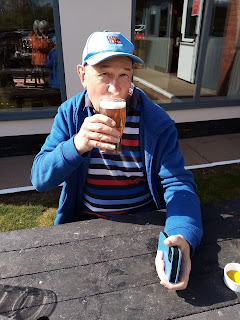 I might be on painkillers but thought 'to heck with it' and enjoyed a cheeky glass of rose anyway. 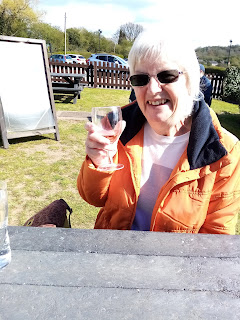 I'm booked in for a haircut on Thursday next week.  Not before time you might say 😉

Anyway, thanks for popping in and stay safe and well wherever in the world you happen to be x

The Reason I've been AWOL

For several weeks now, I have been developing pain in my hip and lower back which I'm sure, in part, is due to being so inactive over the last year.  I have been struggling to walk far or to get up from a sitting position, and the pain has been excruciating.  I rang the GP's surgery for advice and was given a telephone appointment with a GP for Monday 12th April.  I actually made the enquiry on 30th March so the appointment was almost 2 weeks away.  In desperation, I steeled myself to visit the pharmacy in the local supermarket and was given the advice to take Ibuprofen and Paracetamol in combination.  Now, I didn't think you were supposed to do that, especially with my IBS problem (now under control, thankfully) but desperate times call for desperate measures so they say.  The pain is a little easier but it certainly hasn't gone.  I have no idea whether or not the GP can help tomorrow.  Time will tell....

What strange weather we are having again.  On Good Friday our daughter and her family came to visit us in the garden.  At first it was cold and windy so we all wrapped up in warm coats and scarves and sat (well spaced) in the garden.  It gave me such a lovely warm feeling to see and speak to them all and have a 'proper' conversation between the 6 of us instead of a 'bitty' one via video link.  By 1pm it had warmed up somewhat so DD drove to the local chippie and bought us fish and chips as well as pies for the boys which she shared out onto plates for us all.  It was the best day G and I have had since Christmas Day.  The family went home around 3pm and it was at that point that the sun broke through (typical!) so G and I stayed in the garden, sitting in the sun wearing short sleeves and drinking mugs of tea...bliss.

This morning I woke at 8am and found it was snowing.  Strange weather....

The allotment is beginning to show signs of  glorious growth.  We have picked the first of the forced rhubarb and G has sown:

Peas, broad beans, radishes, lettuce and planted some potatoes. The raspberry canes, blackberry bush and grape vine are all putting on spurts of greenery as well as the two apple trees.  I love to see signs of new growth, hope for the future.

We were so sorry to hear of the death of Prince Phillip, Duke of Edinburgh,  but he has had a good life and done wonderful things for our young folk with his Award scheme.  I respected him for his plain speaking too. Rest in Peace.

What I thought was wrong was the BBC removing all their usual programmes from around 4.30pm onwards on 3 channels in order to give coverage to the Royal story.  If people were not depressed at the outset, they certainly would be at the end of watching the story all evening. Gardener's World is our favourite prog on a Friday and was sorely missed.  It was shown last night instead and we only just realised in time to watch it 😡

My hip is hurting now after sitting to write this so I'll sign off. 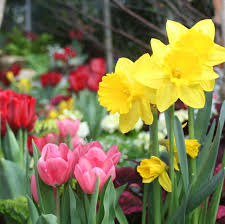 Enjoy your weekend and I'll be back very soon. 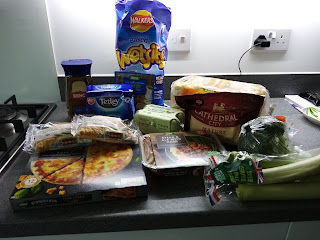