I do hope you have all had a very good week.  Here it's been quite mild and sunny, no rain at all, so we have been to water the plants on the allotment a couple of times this week.
We are still harvesting:

Leeks (lots of them to last most of the winter for soups and stews)
Brussel sprouts
More spinach (in case there really is a shortage of green veg!)

We haven't sown much else because we might have to leave this allotment after we move.  It's looking likely that it will be too far to drive on a regular basis, although we intend keeping it on until early next year, but G has his name down for a half plot in the new area.  It will mean starting all over again but it will be much closer to our new home.

On the new home front, the roof is on and the windows are in.  It's now watertight!  I'm so glad because the bad weather could set in at any time.  It's still looking good for November completion :)  I just wish we could have a date to work towards.

Yesterday I stripped G's double bed, washed, dried and ironed the linen now today I've done the same with my single, although I had to use the tumble dryer for mine when we had a downpour (at last).  I have made a lemon drizzle cake, which is cooling as we speak, and it will be a simple tea of something with chips as I did a full cooked meal last night when G got in from work.

In the supermarket yesterday morning I spotted these packets of basics pasta reduced from 30p to just 15p so I bought 4; 2 for us and 2 for the food bank.  The expiry date is a long way off so they were too good to pass over.  Perhaps they are changing the packaging as this one can't be recycled..... 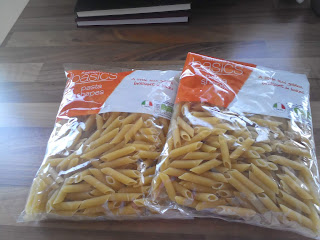 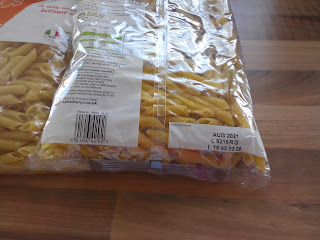 Anyway, I have a full 2 hours before G returns from work so it will be a Christmas crafting session for me (sorry it's the C word ;) but already I've sold some Christmas toppers online so I want to keep up the momentum.

Stay safe everyone and thanks everso for popping in x

It's been a bit of a mixed week weather wise.  We have had a bit of sun, a drop of rain, and dull and dismal but the biggest change is the colder nights and mornings.  Yesterday morning the heating clicked itself on at 7.30am and then off again at 8.30am when it had raised the temperature just above shivering point.  By lunchtime the sun was out and I had the windows open and my shorts on.  How weird is that?  It just shows that Autumn is skating towards us determinedly.

I have started packing stuff ready for the move. Although we don't have a completion date yet, we have exchanged contracts so the move will take place. G has emptied the shed so that we have somewhere to store the boxes (I would find it too depressing looking at them all the time in the house) His gardening stuff has been moved to a small lock up which we rent on site, and which we can keep on for a while after we move.  Firstly, I have sorted out the drinking glass cupboard in the kitchen.  Some decent items were taken to the CS yesterday, 4 carrier bags worth in fact, and the best crystal is being wrapped in bubble wrap and packed into a box.  One of the wardrobes was also sorted out yesterday and tidied up.  It's going to take me ages doing it on my own but I'll get there by November.

On Friday poor DD had to go into hospital to have 2 difficult wisdom teeth extracted under a general anaesthetic.  When SiL brought her home in the afternoon we went to sit with her while he collected the children from school.  She has really been through the mill. The right side of her face was puffy, her lip bruised and she was in pain.  Apparently, they had to take a bit of bone with one of the teeth and the sinus opened up so they had to stitch that closed too. She still can't open her mouth very far and is surviving on cups of tea, soup, yogurt and tiny bits of cheese which she can melt on the tongue. I have been so worried about her that my IBS has flared up again too, what a pain (literally)

Does anyone know of any natural remedies for IBS?

On the positive side this month, I have had a few more craft sales on the internet (around £30)
a £75 win on my premium bonds...yay!...(Although I will have to cash most of them in in a few weeks to pay for the new house :(   a £50 cheque from the Populous Live survey site ( I get about 2 a year) and an amazing £25 on a scratch card.  It has all gone into the savings pot for the move. 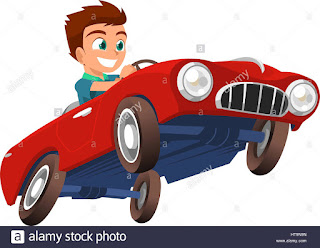 G on the other hand got a speeding ticket and has had to pay £88 to attend a driving awareness course...grrrr…...it's the second time he's been caught on the same stretch of road too.  He can pay that himself.

As I write this I can hear the church bells in the village.  I'm really going to miss that....

Anyway, have a lovely day everyone and stay safe wherever you happen to be x

It has gone so much cooler this morning.  I woke at 8am and, although the sun was trying to break through, the heating had clicked itself on at 13 degrees.  Autumn is definitely on it's way.  It's now just after noon and bright and sunny but still chilly.  I let the heating take the chill off then switched it off because I know I will be busy today, which will warm me up.  Lots of washing, ironing and clearing out still to do....

I had a lovely surprise this morning though.  I was texting my Son in Australia via WhatsApp and my little 3 yr old GD asked to actually speak to Granma.  I quickly made a video call and she was in the bath getting ready for bed.  Now I have a rubbish windows phone with just a forward facing camera so we had a lot of laughs with me having to constantly turn the phone around so that she could see me! lol..  She wanted to tell me that they are going on holiday to Queensland tomorrow.  She is so sweet, I do love her.

My food stock in the cupboard is definitely dwindling now (I really don't want to have to pack and transport too much)  I'm only replacing the essentials when I'm down to the last tin/packet.... 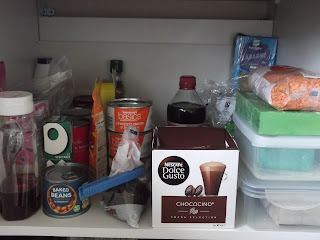 I did find this packet of lentils.... 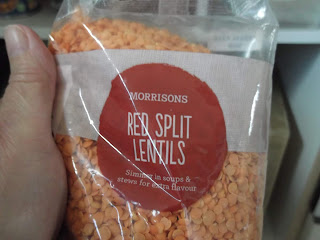 Does anyone know if they actually do go out of date? G refuses to eat them so they never got opened.  If I had realised a few weeks ago I would have taken them to the foodbank.... 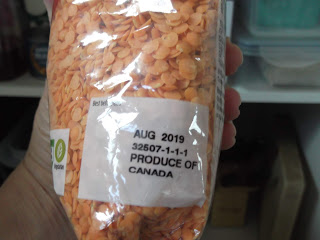 The slow cooker is on with a beef stew for G when he comes home from work tonight ( and, no, I didn't dare add any lentils....he would know!)

I watched the new Jamie Oliver VEG cookery programme on TV a few days ago and I liked the look of the meals, especially getting some spinach into the mac & cheese.  GS said he doesn't like spinach and I replied that he wouldn't know it was in there.  He laughed and said " then why is the sauce GREEN? "  I simply have no answer to that! :)  Did anyone else watch it?

Stay safe everyone, and thanks for popping in x

PS Sooze, if you're reading this,  I've messaged you

Today was the first village fair we have had in the whole 10 years we have lived here.  I have always wanted to join in with something like this, a kind of Midsomer murders without the bloodshed!  There were stalls galore, raffles, food, dog show and, of course, the produce show.  We turned up at their door almost at the crack of dawn (well, 8am on Sunday is almost the crack of dawn, isn't it?) so that we could put in our entries before G went off to work.  We paid the grand sum of £1.80 for a total of 9 entries;  2 for me, 3 each for the GC and 1 for G.
It's also lovely GD's 15th birthday today (how did that happen so quickly?) so we went to a pub for lunch then back to the fair for the rest of the afternoon.

G entered some of his allotment onions and won first prize in the 3 onions category! He was over the moon to say the least :) 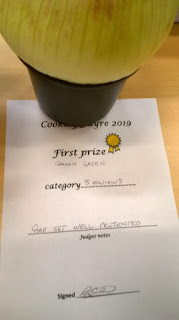 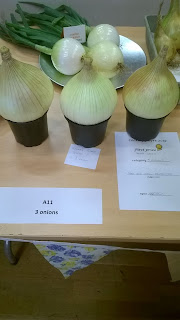 GD won first prize for a colourful drawing of a Minion too which quite made her day.
Unfortunately, nothing for GS or for me for my card entries.... 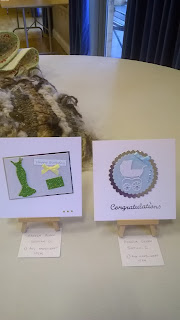 We had a really lovely day, warm and breezy, then came back to ours for a cobbled- together tea of cheese and home grown onion on toast followed by a slice of cake.  Now....I really need to get my act together and lose a bit of this weight which has crept up on me. My jeans are getting a tad close fitting (or perhaps they have shrunk in the wash?  No....?  Ok....

Thank you to everyone who commented on my last post about empty shelves in the supermarkets.  It seems I am not alone.  Lets see what happens when we go shopping tomorrow....

Stay safe everyone wherever you happen to be x

When I did the online food shop last week I was offered a voucher for a free carton of Alpro oat milk and, as I am cutting back on dairy pro... 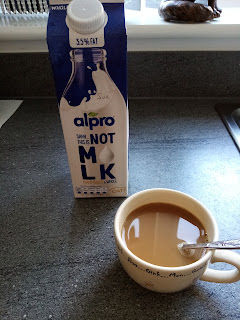