What Would You Do?

It snowed again during the night!  I awoke at 6.05am, looked  through the window and quickley snuggled back under the duvet ☺  Snow is now still falling in big, fat, soft white flakes so I don't think I will even attempt a walk today.  I can't risk falling.

Yesterday, I underwent a long awaited hospital procedure.   Luckily, I received the letter on Saturday afternoon otherwise I wouldn't have known and would have missed the appointment.  I say "luckily" because it only gave me a short time to worry about it 😬 In addition, we were both kept awake both on Friday  and Saturday night by our young neighbour having loads of visitors and partying until the early hours.  She has broken the covid rules all along and it has got worse since her boyfriend left during the summer.  She has a young daughter, not quite 2 yrs old, and I can only assume that her grandmother (the child's great grandmother ) has her for the weekends.  There would be no way that a child could sleep amid all the noise.  We hear the front and rear doors constantly banging, cars doors slamming, loud voices talking, squealing and laughter outside which carries on until 4am.  G and I were both exhausted on Sunday morning after 2 nights lack of sleep.  Its no use speaking to her about it as we discovered in the summer. As soon as her boyfriend left the noise increased. At one point on Saturday/Sunday there were 3 vehicles parked up outside, not including her Nan, who is in her childcare "bubble" 😡

She just increases the hurt the rest of us feel in not seeing our families too.  All the other neighbours toe the line.

I'm in pain from my procedure right now 😫  so if the same  happens again this weekend my patience might just snap and I'll report her.  No wonder the infection rates are so high in the area. I've put up with this ever since first lockdown in March.

I don't want to be mean but would you report her?

PS I'm still waiting for my skin cancer to be treated ...

And I want to thank everyone for the comments on my last post.  I hope all your vaccinations went well.

We had a fabulous day yesterday.  G and I went to the allotment and our daughter and the two grandchildren joined us.  I wanted to dig up a ... 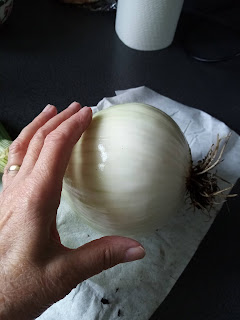 Pensive Pensioner
Welcome to my little world. Life is perpetually changing as well as challenging and I'm on a mission to make our lives in retirement as easy as possible. With that in mind, I'm searching for a bungalow in a quiet area so that we can live frugally but enjoy retirement. I intend to carry on reusing, recycling, growing fruit and vegetables in our allotment and encouraging bees and other insects into our garden. Watch this space!