Thank you all for the replies and wonderful suggestions on my last post regarding plastic pollution.  I'm afraid I no longer get email notification from Blogger when someone responds to a post so I don't get chance to read them in a timely fashion, but they are all very much appreciated.

The last couple of weeks have sped by in a blur.  My poor hubby is now suffering with a neck problem.  After a whole year of dental problems (now resolved) he has a spinal problem.  Physio hasn't helped and I took him for an MRI scan yesterday.  He came out looking pale and in pain.  The problem he has is that his head keeps turning to the left of it's own volition and he has developed a slight head tremor too.  He explained this to the chap at the Hospital so, to ensure a good scan, they placed a pillow under his lower spine to make sure his head connected with the table and supported his head as best they could.  The scan lasted just 10 minutes but hubby was in so much pain trying to control his head movements that he almost pressed the alarm button to stop the scan.  He was just about to press when the nurse told him that a few seconds remained so he gritted his teeth and remained there.  He has been in pain today too although he went off to work as normal to try and take his mind off the pain.  I do so hope that the scan shows the problem and something can be done for him.  He has been slowly getting worse over the last 6 months and the future looks bleak at the moment.  He is so restless because he can't sit to read or watch much TV and it's making me feel restless too...….

Whilst he was at work I have been tidying, de-junking and cleaning.  I also had an hour crafting this afternoon...bliss!  Stuff has been listed on eBay so I might have some more cash to add to my challenge fund.  I have a bid on one item already...yay!  I can't find any other local venues for craft fairs so I'll have to persist with the current one until the end of the year unless something changes.

It has been announced that there is a shortage of CO2 at the moment.  This affects fizzy drinks and the meat packaging industry.  Well I never...you learn something every day.  It won't affect me very much but OH does like a beer and with the World Cup in full swing a lot of people could potentially be a bit miffed.  Has it affected you at all?  Any shortages where you shop?

It has been a wonderfully warm sunny day today and a heat wave is forecast so yesterday I bought a 4.5tog duvet in preparation.  I used my Nectar points to reduce the cost from £15 to £10 so I AM READY! :)  What's it like by you?  What on earth do you find to eat when it's really hot?  My appetite disappears off the face of the earth.  All I crave then is ice lollies.  Help!

We are starting to plan the garden and popped to B & Q yesterday for six small slabs to site the storage box on behind the garage so tha... 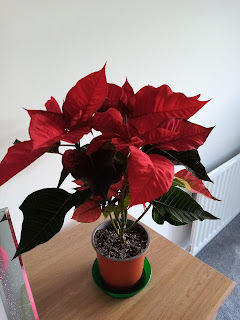